One interesting investigation I had was that of a murder-for-hire in one city that the suspect used a Google search to find the victim’s home address in another city.  Simple enough crime to plan.  Google the name, find the address, do the hit.  Except in this particular case, although the suspect Googled the correct name, there were two people with the same name in the same city and he picked the wrong one.  I called this case my “Sarah Connor” case.

Fortunately, we intercepted the hit before it happened and prevented a random murder on the wrong person (as well as preventing the murder of the ‘right’ person).  In a basic sense, the suspect used the technology of one of the most advanced computer systems in the world (Google….) to attempt a murder only to choose the wrong name in a Google search hit.  This type of criminal incompetence and carelessness is commonplace.  It is also the way that most get caught.

On the other end of the spectrum, we have Hollywood’s version of high tech crime fighting.  Minority Report with Tom Cruise showed us that not only can crimes be solved with technology, but that crimes can also be prevented with technology.  As for the technology used in the movie, it could have only been more accurate had a predictive analysis computer system been used in place of the fortune-telling humans (“Precogs”) in a big bathtub.

In a turn-key surveillance system, no person is anonymous.  Whether it is a private business or government agency, no one is immune from potentially being watched, tracked, or reported.  Private businesses use facial recognition for both improving customer service by detecting your mood through facial expressions as well as preventing crime.

“…faces of individuals caught on camera are converted into a biometric template and cross-referenced with a database for a possible match with past shoplifters or known criminals.” https://www.theguardian.com/cities/2016/mar/03/revealed-facial-recognition-software-infiltrating-cities-saks-toronto

Criminals who try to avoid using technology are severely limited on the type of crimes they can commit.  That’s a good thing.  A drug dealer without a cell phone is like a taxi cab driver without a taxi.  It is part of the business and can be tracked, traced, monitored, intercepted, and forensically examined.  Technology is a natural and required part of any criminal’s operations.  Criminals not using technology are ineffective as criminals, for the most part. 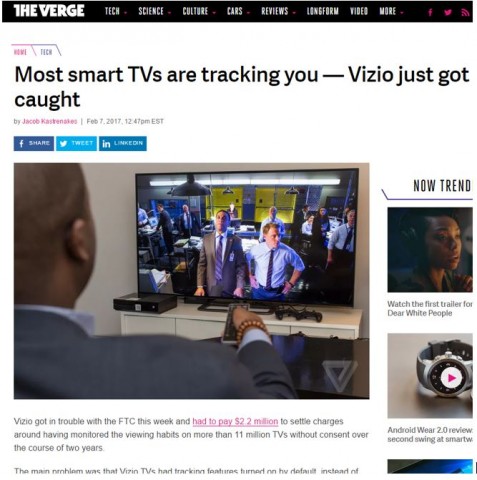 Criminals who try to avoid surveillance technology in public, such as license plate readers and facial recognition are also extremely limited in the crimes they can commit since they would have to remain in their homes to commit crimes outside of public surveillance methods.  Even then, committing a crime in a home is not without the risk of being monitored, either by a government agency, a private corporation, or an electronic device plugged into an outlet.  If you own a Vizio television, consider yourself tracked, hacked, and sold to the highest bidder. http://www.theverge.com/2017/2/7/14527360/vizio-smart-tv-tracking-settlement-disable-settings

From Amazon’s Echo to an Internet-connected fridge, data is collected as it happens, and stored either locally on the device or on a remote server (or both).  Depending on how ‘smart’ a home is, every drop of water usage can be tracked, every door opening logged, and every person entering and leaving the home gets recorded.  This does not even include cell phone use that is tracked within the home by providers.  And the computer use!  The things we do on the computer leave traces not only on the hard drive, but also on the servers we touch with every www typed.  Criminals in their home are no more protected from being discovered than on the street.  This is a good thing.

As to the significance of some of these high tech smart home devices, consider that water usage can give inferences as to what was done in a home, such as cleaning up a crime scene… 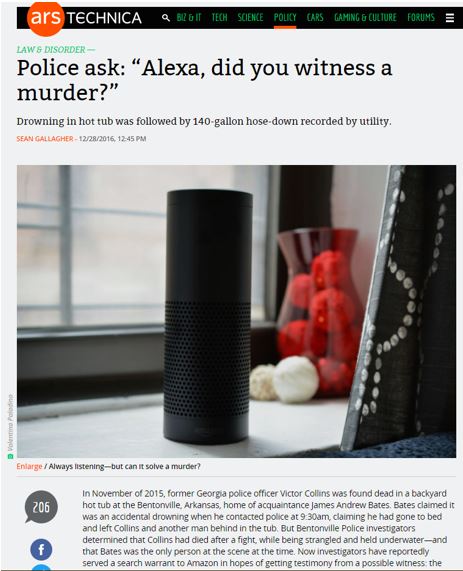 During all the years of being a detective, I did trash runs.  Lots and lots of trash runs.  I hated the trash runs until I found good evidence.  Garbage smells really bad, especially during the summer.  Digging through garbage bags in a dumpster in the middle of a hot day can make the toughest person gag or puke.  But you can get some really good information on the criminals you seek. Did I mention it can smell really bad?

That is one of the reasons I really enjoyed moving into digital forensics.  Digging through the garbage of data on a hard drive is a lot easier on the nose than digging through a dumpster.  Plus, the information you get is sometimes a lot better than what you can find in a garbage can.  There are exceptions…you won’t find the murder weapon in a folder on the C:/ drive of a hard drive unless the murder weapon was a computer program.

You would think that with the amount of technology available and already in place that police would be able to uncover more crimes, find more criminals, and be more effective.  When a smart home can email the home owner a photo of someone ringing the doorbell, newer cars come with pre-installed GPS tracking systems, and a fridge can record a live stream of residents in the kitchen, the ease of finding evidence should be easier…right?

In any case where electronic devices are not being seized for examination, evidence is intentionally being left behind.  I am not referring to the electronic devices that are difficult to find, like a camouflaged USB device hidden within a teddy bear. I’m talking about the cell phone sitting on the car seat of the suspect arrested for burglary.  Yes. I’ve seen it happen.  Part of the reason is that unless lead is flying, most criminal cases and dispatched calls are boring to the responding officer.  As an example, with a residential burglary, the suspect is usually gone and the victim is lucky if the officer even tries to recover prints from the scene.  Stolen car?  Oh well. Fill out the report and call your insurance company.

I have been out of police work for about 10 years and I had hoped this lack of urgency in police work has changed.  But apparently not.  I recently helped someone with their stolen purse from a gym.  I got the call first instead of 911, but that’s another story.  Anyway, I showed up to give some guidance and eventually the district officers arrived.  Even after being told that video cameras faced the parking lot, and that the suspect/s went inside another victim’s car, the officers said, “The cameras probably didn’t get it”. The manager of the gym even offered up the video and said the cameras face the victim’s car... but the officers they left without even asking to see the video.  After telling the officers that the suspect/s just used the stolen credit cards in a store less than 5 miles away and that the store surely must have cameras, one of the officers said, “We can’t get much from a store’s security cameras.  You just need to call your bank to cancel your cards.” End result: File a report.  Call the banks. Get a replacement driver’s license.  Yes.  This still happens.  And criminals thrive on it.

The irony with a lack of seizing electronic evidence is that for most of the forensic examiners in law enforcement, they love to dig and dig and dig and dig through data to find the smoking gun.  It is the lifeblood of what they do.  If only the devices were seized and given to them.  Case in point:  I was called to exam a laptop of a missing teenager, six months after she was reported missing.   The detective simply did not put any reliance on a laptop, in which the teenager was religiously using for social media, as a source of important evidence.  The teen’s body was later found buried less than 5 miles from the police department where this detective drank coffee at his desk, with the laptop sitting downstairs in evidence for months.  I would have loved to examine that laptop ON THE SAME DAY the teen was reported missing.  It was virtually useless by the time I got it.

Seeing that tech should make it easier for police work, it should make it easier for writers of fiction.  It doesn’t.  I read (and write) a lot.  Technology can ruin good fiction.  No longer can a fictional criminal live his or her life under the radar.   Even the good guys can’t avoid ‘the radar’.   The Jack Reacher series should have been set in the 80s, because there is no way that Jack Reacher can roam the country without ever ringing some bells in surveillance tracking technology and live only with the technology of a single ATM card.  I was lucky that my undercover work was before the Internet really took off.  Backstopping an ID today requires way more than it did when I was undercover.

Writing fiction set in today requires knowing technology, because any scene that should have technology but doesn’t simply makes that scene unbelievable.  Same with Hollywood. Seriously.  It gets harder and harder to watch a movie that intends to be realistic without realistically using technology.   Show me a movie where no one is texting anywhere in a scene and I’ll show you a movie where technology is selectively ignored for the sake of simplicity at the cost of plausibility.

I can hear it now.  Police work is hard.  It’s not easy to get search warrants.  Not every department has a forensic unit.  We are too busy to solve crimes.  We are short-staffed. We don’t get enough training.  Blah blah blah.  I’ve heard it before and proved it can be done time and time again.  I have always believed that 10% of law enforcement do 90% of the work while 90% of law enforcement try to pawn off the remaining 10% of the work (while fighting over taking credit for it).  If just another 10% of law enforcement suddenly got a sense of urgency to require high tech investigations be a part of every crime scene, we’d reduce crime stats in half and solve twice as many crimes.

Now if only I can find a book or movie that doesn’t pretend technology doesn’t exist..