We are of a curious mind, we the forensic examiners, private investigators, OSINT professionals, and journalists. Our work is for the public good, and we are skilled in the effective wielding of the most powerful weapon on the planet: INFORMATION!

Ethical behavior not only keeps your reputation solid but also keeps you from being sued or jailed. The cancel culture falls into a category of ethics, where if an infosec professional engages in canceling a person on the Internet, they are (in my opinion), the epitome of being unethical by wrongfully turning legitimate OSINT into the Baseball Bat of Internet Mob Justice. Ethics matter. The truth matters.

Refer to the story for details (https://patch.com/illinois/chicago/trolls-wrongly-accused-retired-firefighter-capitol-riot-murder). In brief, an unidentified person (Figure 1) suspected of murder was misidentified (Figure 2). The identification was based on a posted image of the actual suspect in which OSINT was most certainly used to find a similar image online. The OSINT worked to find a similar image, but the verification of the match by the finder failed as did the action taken afterward. Rather than forward to law enforcement to verify, an Internet mob piled on an innocent person. 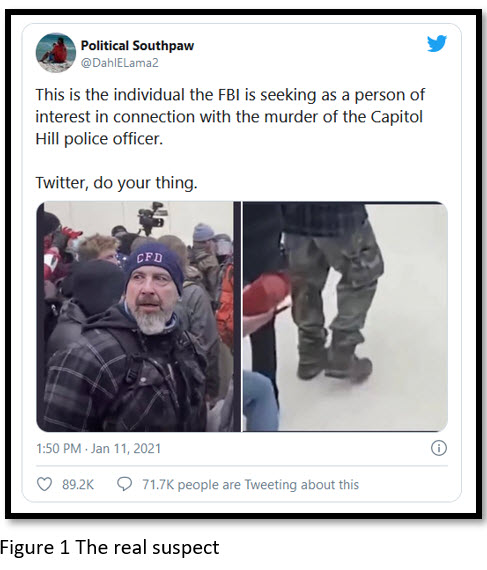 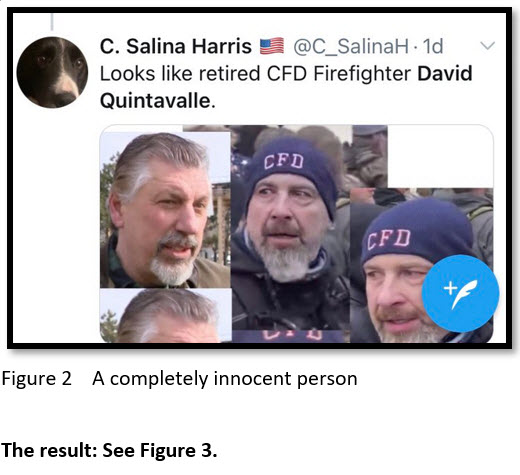 Could it get any worse? Sure. Once you blindly jump feet first into a rabbit hole, everything you come across that you believe to be true will become collateral damage. Even in this example, the innocent son of an innocent victim gets drawn into the wrong accusations. This may not seem to be a big deal, but the careers and reputations can be permanently damaged. Friendships, family, promotions, and even careers can be lost on a false allegation! It is so so easy to prove yourself correct if you are hellbound to do so, even when everything that you find is false but perceived in a way to support your belief.

An older example from 1996 is the Richard Jewell case. Refer to the story for more details https://en.wikipedia.org/wiki/Richard_Jewell. Again, this was another misidentification, and Internet pile up that resulted in an innocent person’s life is forever turned upside down. This one was so bad that a movie was made out of the story. There are plenty of other misidentifications that you can find online or unluckily be involved in. Misidentification is not new. Law enforcement has had its fair share of accusing and arresting the wrong people for the same reason that Internet mobs have made: failure to verify and corroborate.

Did I somehow forget that I dated Nicole Brown Simpson?

Part of my incredible year of 2020 was getting a phone call from a reporter. I get calls from reporters on occasion, but this one was totally different. The reporter asked if I wanted to give him a statement before he printed an article about me having an affair with Nicole Brown Simpson in 1993.

First off, this didn’t happen. My shock was how could I be accused of something that I didn’t do by a nationally recognized reporter? Second, I immediately had visions of being splashed across the Internet of having an affair with OJ Simpson’s wife! My wife would not be pleased….

The details on this story, as told to me by the National Enquirer reporter was that he was holding photos of me arm-in-arm with Nicole Simpson in Cancun or Cabo San Lucus (I forgot which he said) in 1993. I told him that he has the wrong “Brett Shavers” but his response was that his ‘database’ was correct. I suggested that he not print the story because it is false, but if he did print it, to let me know because I’ll see what crazy mileage I can get out of it, mostly to write a blog post about it.

Then it got a little weirder. I told the reporter that I was in my first year of patrol in a police department during that time and I probably wrote a ticket or made an arrest on the alleged date of the photo, didn’t take any vacation that year, and married (my wife would certainly know if I flew off to Mexico without her and our kids!).

The reporter’s first reaction: “So you’re telling me that law enforcement was involved in her murder?!?”

So now you have a reporter who accused the wrong person and immediately created a conspiracy that law enforcement was involved in a murder and ready to write a story about that.

All I said was that he needed to check his sources and verify and that if he printed the story, I’d prove it false and go from there. By mere coincidence, I had a dated photo of me from a local newspaper from that time frame. I emailed it to the reporter and I think the reporter accepted that I looked much different from the person in the photo that he had. The more I think about it, that probably means that the guy with Nicole Simpson was better looking than me....

The point of this story is that anyone can be falsely accused by anyone for anything, and once the Internet dogs of war have been released, irreparable damage will occur. On top of that, this reporter was so dead set that I was the Brett Shavers that dated Nicole Brown Simpson, that he immediately jumped to a conclusion that since I was in law enforcement at the time, that law enforcement must be involved in her murder!  I do credit the National Enquirer for actually double-checking and finding out that they had the wrong person. Of course, if they printed their photo, my photo (backed by a local newspaper) would prove it to be false. Still...don't do this!

Unleashing the Internet dogs of war!

One thing about mob rule is the lack of personal, moral, and legal responsibility. It is quite easy to create a passionate stir, lead a group of people to the edge, incite emotion, and nudge the group over the edge into an all-out attack while at the very same time, avoid responsibility for causing it, especially if done anonymously. This is not ethical.  The Baseball Bat of Internet Mob Justice does not stop. It does not think. It grows and beats the victim until nothing of substance is left.

The anonymous and double-anonymous complaints

Here is something that happens commonly on the Internet:  “I will not name this person, but they are (name a group that this person belongs to) and they did (name the social norm violation).”

This type of accusation demonizes an entire group of people for committing some violation of a social norm, and now everyone in that group is now suspect. Any person speaking up in that group will then call attention to themselves and be misidentified as the violator. Additionally, it doesn’t solve any problem and most importantly, the claim cannot be verified or disproven.

How does any of this apply to us?

Society does not need a law enforcement officer who has a bias against any specific or general group of people, as that bias will negatively affect the community at large and wrongfully targeted individuals.

Society also does not need unethical people who work in ethical fields to wrongly accuse others because of internal biases, beliefs, or false conclusions to what they believe to be true. Any one of us can go down rabbit holes of “investigating” someone or some event and lead ourselves down the wrong path because of preconceived beliefs, failure to verify information, and a determined mindset to prove ourselves right rather than find the truth.

Best investigative method to prevent this from happening to you

In my law enforcement career, I have seen a few examples where investigators did not do this. In one example, a search warrant was served on an innocent family’s home. The warrant was served by SWAT (I was not on the team at that time), but SWAT was innocent. They only served the warrant as written by the case investigator and signed by the judge. The investigator failed at the most basic task of verifying an address. The address on paper wasn't even close to the physical address. I’ve seen this almost happen in another warrant service, but fortunately, I was aware of the real address and stopped the warrant from being served while the team was AT THE FRONT DOOR! Again, this was an instance of not verifying information.

In every instance (there are more!), verification was not done. Investigators had a belief and followed only the evidence that supported their belief. When an investigator does that, every single time they will prove their beliefs to be right, when factually, they were wrong. This never ends well.

All of us are prone to making mistakes with assumptions. Unfortunately, there is not much accountability when this happens with Internet allegations. Reporters may falsely accuse someone, ruin the person’s life, and the only accountability is publishing a correction article. On the Internet, people delete their posts and walk away without care that the Internet remembers forever.

On the Internet, accusations can be made, even anonymously, spread through the Internet like a virus, and even if proven to be false, no accountability to the accuser when destroying someone’s life. We need to be better than that, and if any of us falter, others should take the care to gently remind to take a step back, breathe, and verify before releasing the dogs of war online.

I was "OSINTing" the reporter while on the phone and verified his name, number, email, and other information.